In the soon-to-be-released sDNA3, it will no longer necessary to repair split links.  This looks like a departure from how sDNA used to work, so I’d better explain it.

First, let’s clarify what we’re talking about.  A split link is where a single network link is represented by two or more polylines in the data, rather than a single polyline as is customary.  Here’s an example, in which I’ve placed circles over polyline ends to make them visible.  The polylines shown in red form a split link.  (Of course they look like a single line – we only know it’s a split link because of the node halfway along). 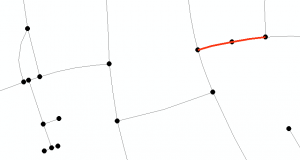 The point where the two red links join is often called a pseudonode in the technical literature, so we can also say that split links are the lines joined by pseudonodes.

Two of our aims in making the original sDNA tool were (i) to exploit measures of link density to add information to our models, and (ii) to be compatible with data in the format everybody uses, that is to say, link-node.  For this reason it seemed like a good idea to insist on using whole links as the unit of analysis, so we specified that sDNA must be fed networks without split links, and provided a tool for repairing them.

It turns out that was a bad idea, as it doesn’t offer our users enough flexibility.  In our own work, and also working with our Impact Accelerator partners, we have found several reasons why you might want to leave split links as they are:

So, here is how split links are handled in sDNA3:

Finally, sDNA3 outputs a new measurement called LFrac or Link Fraction.  This shows you what proportion of a link each polyline in your model represents.

There are, of course, reasons to use the other types of weighting on occasion.  Polyline weighting is useful if you have address point data which you have attached to the network, as it preserves the exact value of each attached weight.  Length weighting is useful for analyses where you think network length is more representative of urban density than link counts.  Both of the latter can also be used along with land use data to provide custom weights per link, or per unit length, for different types of land use.

But go ahead and use split links: leaving them in there won’t affect the way the analysis is weighted by default.  If you use a lot of split links (and I mean a lot – like splitting every link into multiple parts) it will slow down sDNA, but if you only use a few here and there – say for bridges, design options, one way systems, etc – you won’t notice the difference in speed.  If you want higher accuracy only on a small part of your model, you can also split links in that part only to keep compute times down.