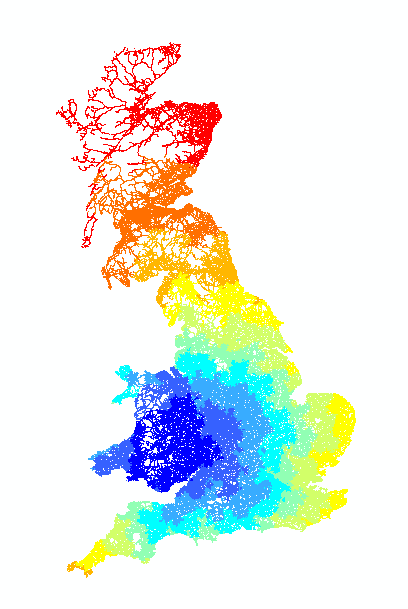 sDNA was behind a large part of the scenario modelling in a recent report on the ecological footprint of the Hay literature festival.  Crispin Cooper (of the sDNA team) and Andrea Collins (Planning & Geography) presented the results at the festival itself.

How was sDNA used in the study?  Relatively simply – we produced a map of road travel distances to Hay from all locations across the UK to feed into further analysis.  Using angular analysis, we were able to proxy shortest-time rather than shortest-distance routes based on minimal data – i.e. calculating travel distances assuming people take the motorway rather than small lanes, when available.  All of this is possible without the need to pay for travel time data.

The facility to output a map like this is part of the feature set of the upcoming sDNA version 2.  Currently this is only available to our research partners, though we are open to forming new partnerships so do get in touch if you are interested.  For those of you who already have access – you would produce a map like this by making use of the outputdestinations keyword in advanced config.  If you don’t want to be overwhelmed by data, you would also need to restrict your output to a single origin using origin=511326 where (in this case) 511326 was the object id for the link where the Hay festival is situated.