Here are some images from some work we did for the Department of Public Health.  The first is a buffer analysis of access to footpaths, bridleways etc for each output area in Wales.  The buffers shown on the map are centered on OA centroids; designed to indicate the area accessible by driving 13km (on a road obviously) then walking 2km (as the crow flies – sadly nobody seems to have a definitive source of network data for rural paths).  The colouring shows access to public rights of way. 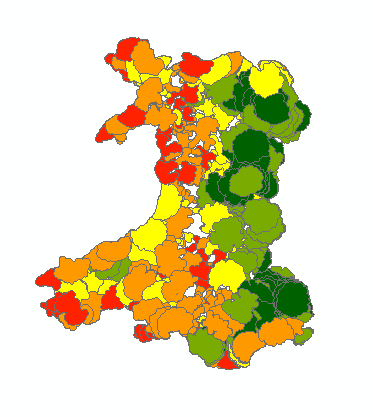 Network+Euclidean buffers around Output Area centroids in Wales, coloured to show access to footpaths and bridleways (green is more)

Somehow the shapes produced remind me of sheep, which is nice, but before anyone gets too parochial about that I should point out that most other countries would look the same.  As you can see, it’s the border with England that seems to have the best access to countryside; but that’s because the above map misses off the open space across which we are lucky enough to be able to wander freely.  So here’s the open space (this time ditching the sheep shapes and plotting access in the centre of LSOAs for legibility): 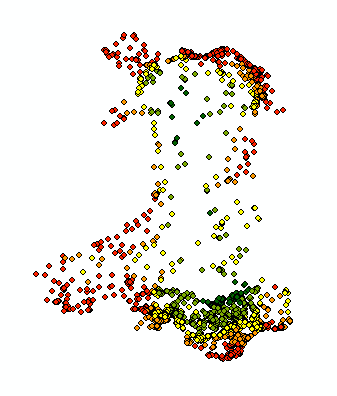 Access to open space within 13km buffers (green is more)

Now we see the truth of it – the backbone of Wales has an enormous amount of publicly accessible green space.  The people who miss out, on these measures, are the residents of Carmarthenshire which doesn’t seem to do well on either open space or rights of way.  (There is also the edge effect induced by the coastline – obviously people living by the sea have less land accessible to them – but then the coastline is nice feature in itself).  Anyway, all this is now being studied for its impacts on mental health.

What did sDNA do here and how can you do it?  It uses features of the upcoming sDNA version 2; namely (in advanced config) outputnetbuffers to produce the network buffers which are then processed to make the sheep shapes.  Also skiporiginifzero to restrict our production of buffers to the OA centroids we are measuring.  Of course, ArcGIS network analyst can do this – in theory!  In practice, it crashed when presented with such a large analysis, but sDNA didn’t.