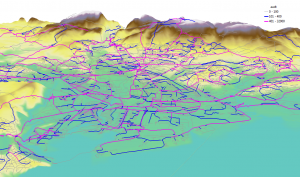 Crispin & Alain will both be at the Transport Practitioners Meeting in London, 2nd July 2015, talking about 3d network models for the prediction of cyclist flows.

Short version: sDNA+ allows the modelling of link level cyclist flow models based on the spatial network alone (ideally calibrated with cycle and motor vehicle count data).  First we produce an sDNA model of motor vehicle flow, then feed this into the sDNA+ cycle model which predicts propensity to cycle based on urban density, and cyclist routes based on length, directness, avoidance of slope and avoidance of vehicle traffic.

We also have models of accidents based on this, and tools for assessing the conflict between motorized and cycle traffic on a city wide scale.